The SHEROES Foundation, a Ghanaian-based International non-profit organization, committed to supporting and promoting women in all facets of life wishes to congratulate Her Excellency, Nana Konadu Agyeman-Rawlings for being the first female Candidate to contest for the position of President of Ghana. The Foundation’s “Elect Her” program was created to help women who aspire to higher offices, so we want to take this opportunity to show our support and appreciate her efforts. 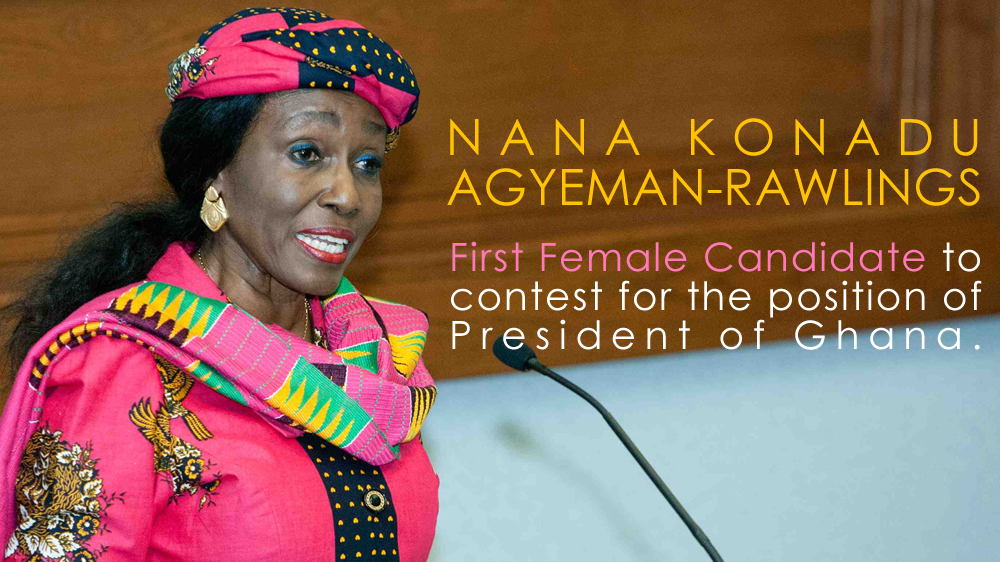 Madam Nana Konadu Agyeman-Rawlings has broken the proverbial glass ceiling and we salute her.

The former First Lady is contesting for Presidency in Ghana’s December 7th, 2016 general election on the ticket of the National Democratic Party, a party which she founded.

“Her unwavering advocacy for gender equality and equity as well as her pioneering efforts for the cause of Ghanaian Women and Children are worth noting,” says the Executive Director.

In 1983, Mrs. Agyeman-Rawlings and a number of like-minded women established the 31st December Women’s Movement, a Non-Governmental Organization, which mobilized women across the country to empower them socio-politically, economically and culturally.”

The 31st December Women’s Movement under her able leadership has received worldwide recognition for its contribution to issues concerning women and for its success in facilitating changes in government policies that discriminate against women. Most notably, the Organization championed the promulgation of the ‘Interstate Succession Law (PNDC Law 111)’- a law that protects spousal rights to inheritance in the event that the other partner dies interstate.

SHEROES noted that until the passage of the law, women were the primary victims of unfair cultural practices where upon the death of the husband without a Will (intestate), the widow and children lose the husband’s property to his extended family.

The Foundation says Madam Nana Konadu Agyeman-Rawlings’s tireless efforts in fighting for the rights of women makes her a leader among her peers, she is considered a “SHERO”.

“You are an inspiration to women everywhere and a shining beacon for our young girls to emulate, we celebrate you”, says SHEROES in a statement issued in Accra today.